Last year SPS - Smart Production Solutions celebrated its 30th anniversary at the fairground in Nuremberg. The leading trade fair for smart and digital automation covered an exhibition area of 135,500 m², and 63,708 trade visitors and over 1,500 exhibitors from Germany and abroad met there in order to find out more about current trends in automation and exchange views. In addition, all of the participants had the opportunity to take a look at the development of the SPS fair by visiting an anniversary exhibition in the NCC Mitte building.

As part of a competition, you will find below an overview of the salient features of the SPS’s never-ending success story.

The SPS opened its doors for the first time in 1990 as SPS/PC/Drives in Sindelfingen - at that time it was still a trade fair with an accompanying congress. Altogether, 3,420 visitors and 63 exhibitors occupying over 3,500 m² of exhibition space experienced the kick-off of a modest three-day industry meeting, which would develop into a leading international trade fair in the years that followed. Ground-breaking industry milestones from the 1990s onwards, such as making the World Wide Web, and in particular the innovations resulting from it, accessible to the public provided the event with a platform from the very beginning. This was quickly reflected in continuous growth in the number of visitors and exhibitors. Seven years later, it was necessary to give the event more space to grow. So, the trade fair, which had been renamed SPS IPC Drives in 1991, moved to the fairground in Nuremberg and expanded from one exhibition hall to three in the first year.

While SPS IPC Drives in Nuremberg was continuing to grow in importance, the SPS Industrial Automation Fair (SIAF) was the first satellite event to be held, in Guangzhou (China) in 2009, and since then it has been regarded as the meeting place for the automation industry in Asia. The SPS IPC Drives cracked the 50,000-visitor mark a year later, and at the latest by then it proved it had become the annual highlight for an automation-enthusiastic trade audience from all over the world.

The SIAF in Guangzhou was joined by further offshoots of SPS IPC Drives, in 2011 by the SPS Italia in Parma (Italy) and in 2018 by SPS Automation Middle East in Dubai (UAE), and these have all established themselves as successful events as well.

Something that had long become established in the vernacular of the fair’s visitors and exhibitors was officially reflected in the name of the event in 2019 and took into account the digital transformation in automation technology: For the 30th anniversary event, SPS IPC Drives became SPS - Smart Production Solutions. The name of the established trade fair may have changed, but its proven concept and content remained the same.

Today, SPS stands for an international event that welcomes the who‘s who of the automation industry to Nuremberg for three days every year. At the fair, highly qualified trade visitors and exhibitors hold intensive discussions as equals and exchange views on the challenges of today and tomorrow. SPS compact: The official e-paper for the SPS 2019

Find out about the many highlights at the 30th SPS right now – in a very special way: with our interactive e-paper SPS compact. Review: In the first edition of SPS compact 2020, exhibitors show how the technology presented has developed and what comes next. 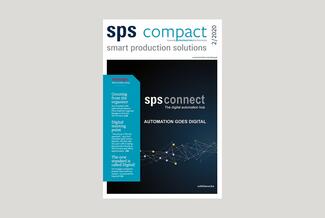 Find out more about SPS Connect in our new issue of SPS compact. The virtual platform of the SPS has a lot to offer.